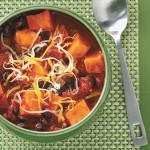 Another great recipe for all my vegan or vegetarian friends out there! And, even if you’re not vegan? You’ll still enjoy this savory, spicy vegan chili recipe. It’s packed with fiber and a surprising amount of protein.

And it’s super easy to make. There’s just one step…really! Throw all ingredients into a slow cooker (also called a crock pot), set the timer and temperature and walk away. Eight hours later, you’ve got a delicious meal ready to eat.

Don’t have a slow cooker?

Consider investing in one because it’s one of those essential kitchen tools that really helps take a lot of work out of preparing healthy meals. You can find one for under $50 bucks at stores like Target.

Do you love chili as much as I do? Try these recipes: Vegan Espresso Black Bean Chili and Amber Ale Turkey Chili. 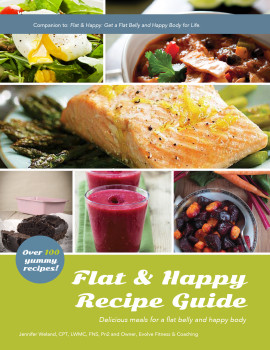 My Flat & Happy Recipe Guide is filled with meals that taste good and are good for you.